Study the two photographs. In 1.5 minutes be ready to compare and contrast ([kənˈtrɑːst]) the photographs:

You will speak for not more than 2 minutes. You have to talk continuously. 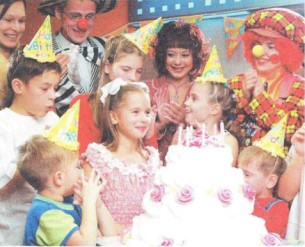 E.g. … play(s) an important role in our life/ is (are) an essential part of our life

I’d like to compare and contrast these two pictures.

As for the similarities between the pictures, they both show …

The pictures have some features in common.

In both pictures we can see..

One of the similarities is that…

However, there are some differences.

Speaking about/as for the differences,…

In the first photo, while/whereas in the second one…

As for me/ As far as I’m concerned, the first/second picture is more appealing.

That’s all I wanted to say.

E.g. They could be relatives. She looks pleased. They look like old friends. They must be at a train station. They seem to be friends. etc.

Celebrations play an important role in our life. People have fun, get together and share warm feelings. I’d like to compare and contrast these two photographs. In the first picture there is a man holding a child in his arms. They are celebrating birthday and the child is blowing up candles. In the second photo there is a group of people with a girl in the centre standing in front of a large cake. Both pictures have some similarities. Firstly, they both depict birthday celebration and both children are ready to blow up candles. Secondly, there is an atmosphere of joy and delight in both photos. However, in contrast to the second one, the first celebration is a family one. There are no other guests but for the family member, whereas the second photo shows a big gathering of people. Besides, the guests in the second photo are wearing funny costumes and are ready for a massive celebration, while in the first photo the family members are enjoying their time at a small table at home. Even though I’m fond of family gatherings, I prefer the party presented in the second photo as I really love receiving a lot of guests, playing games and dancing. Besides, I love meeting new people other people’s birthdays. In conclusion, all social events unite people and give them new impressions and memories. That’s all I wanted to say.