Brief summary of what happens on the graph.

Where did the graph rise/decline sharply and where slowly? What is the difference between initial and final figures?

Going up ↑
To rise, to go up, to increase, to grow, to climb

Dramatically: to shoot up, to surge, to rocket, to soar

Highest point: to reach a peak, to peak, to reach the highest level

To decrease, to fall, to decline, to go down

Dramatically: to drop, to plunge, to plummet, to slump

Lowest point: to fall to a low, to sink to a trough, to reach a bottom, to hit a low

No Change ─
to remain constant/steady/unchanged/stable, to stabilize, to level off

Up and Down ↑↓
To fluctuate, to undulate, to be erratic

Going up ↑
A rise, an increase, a growth, a climb

Highest point: a peak, the highest level, a high

a decrease, a fall, a decline

Dramatic: a drop, a plunge

Up and Down ↑↓
Fluctuation, undulation

Note! We cannot make nouns from some verbs, such as to rocket, to plummet, to  level off etc.

The first one illustrates…, whereas/while the second one shows…

The number of … correlates with…

Useful verbs: to surpass, to exceed

Note!
You can use a combination of adjective + noun, or verb + adverb, to avoid repeating the same phrase.
Example: There was a sharp decrease in the numbers. The numbers decreased sharply. 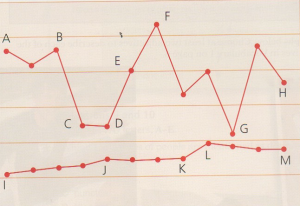 1) Laptop purchases soared over the period.

2) The sales dropped in June followed by a a period of stability.

4) The number of complaints gently fell and then quickly recovered.

5) The amount of money saved steadily increased over the year.

6) Attendance at the lectures remained stable.

3. Make nouns out of these verbs

4. Study the sample task and answer

The line graphs below show the production and demand for steel in million tonnes and the number of workers employed in the steel industry in the UK in 2010.

Summarize the information by selecting and reporting the main features, and make comparisons where relevant.

You should write at least 150 words. 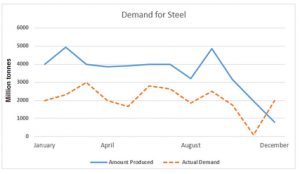 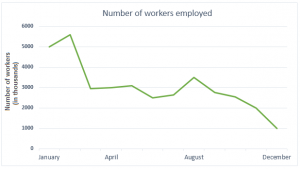 The first line graph compares the steel production and the demand in the UK in 2010 while the second one reveals the employee number in the industry in the same year. Overall, the production of steel was higher throughout the year than that of the demand except in December and the highest number of employees was employed in this industry at the beginning of the year.
According to the first graph, the UK produced 4000 million tonnes steel in January 2010 and at that time the demand was exactly half of that. After the first quarter, the production and needs for steel remained almost the same. At the end of the second quarter, August, the UK’s steel production stood at just over 3 thousand million tonnes against a million tonnes less demand. From January to November, the production was higher than the demand and the gap between these two was on average a million tonne. However, the scenario shifted dramatically at the end of the year. From September to November, the steel production plummeted and so did the demand. In December, the demand for steel exceeded the total production.
The second line graph reveals that 5 million employees worked in the steel industry and this number dropped to two million less in April. From that time onward, the employee number showed some fluctuations and in August, the UK steel sector employed around 3.5 million workers. This number continuously dropped throughout the rest of the year and declined to 1 million in December.

a) Complete another description of the same graphs

The production of steel is 7)… with the employed workers in this sector. In January 2010, the steel industry in the UK employed 5 million workers and it went as high as roughly 5.8 million in February. From March to July, the workers’ number 8)… at an average 2 million and kept on 9)… from September till December. At the 10)… of the year, the UK steel sector employed 1 million people.

b) Complete on more description of the same graphs

The first line graph 1)… a comparative analysis of the market requirement for steel and production of this material in 2010 in the UK. The second graph 2)… the total number of workers employed in this industry in the same year. Overall, the steel production in the UK in 2010 3)… the demand, except at the end of the year.

The production of steel throughout the time exceeded the demand. In the first quarter of the year, the actual market call for steel started at 2000 million tonnes in January, but production was two times with a continuous 4)… . Later somewhere in April, the demand started 5)…, but production was 6)… and 7)… 5000 million tonnes. Moreover, demand showed further 8)… approximately till November and fell to almost zero whereas production of the steel attained plateau for some time with further variations and started 9)… later. After that, in December the demand was nearly two times higher than the production.

From the second graph, it is evident that the total number of workers in the steel industry in the UK was 5000,000 in January and it 10)… for a month or so. But it then showed a sudden plunge and reached 3000,000 by April, with further fluctuations in number till August. However, the number of workers continued to fall and reached 1000,000 by the end of the year.

Going up ↑
To rise, to go up, to increase, to grow, to climb – подниматься, повышаться

Dramatically: to shoot up, to surge, to rocket, to soar – взлетать

Highest point: to reach a peak, to peak, to reach the highest level – достичь максимума

To decrease, to fall, to decline, to go down – снижаться

Dramatically: to drop, to plunge, to plummet, to slump – резко падать

Lowest point: to fall to a low, to sink to a trough, to reach a bottom, to hit a low – достичь минимума

Up and Down ↑↓
To fluctuate, to undulate – колебаться