A bar chart or bar graph is a chart that uses horizontal or vertical bars to show comparisons among categories. One axis of the chart shows the specific categories being compared, and the other axis represents a discrete value. Some bar graphs present bars clustered in groups of more than one (grouped bar graphs), and others show the bars divided into subparts to show cumulate effect (stacked bar graphs).

1 or 2 sentences, where you paraphrase the information from your question.

Description of major trends on the graph –  2-4 key features.

Use word ‘overall’ to start your general overview.

Description of specific features in 2 or 3 paragraphs.

The bar chart shows the monthly spending in dollars of a family in the USA on three items in 2010.

Summarize the information by selecting and reporting the main features and make comparisons where relevant. 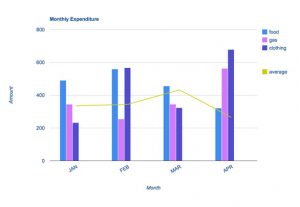 The bar chart depicts the monthly expenditure on food, gas and clothing of a family living in the USA in 2010. Overall, it can be seen that levels of expenditure fluctuated over the period.

To begin, in January the most money was spent on food, at approximately $500 per month.  Although expenditure on food increased slightly the following month, it then fell to account for the lowest expenditure of all the items at the end of the period at just over $300.

Gas appeared to follow the opposite pattern to food spending. It started lower at about $350 per month, falling in the following month, and then increasing significantly to finish at just under $600 in April.

Clothing, which at just over $200 accounted for the lowest expenditure at the beginning of the period, fluctuated dramatically over the time frame. After reaching around the same levels as food in February (nearly $600), it dropped markedly in March, then jumped to just under $700 in the final month.

With the exception of an increase in March, average spending decreased slightly over the four months.

The bar chart below shows shares of expenditures for five major categories in the United States, Canada, the United Kingdom, and Japan in the year 2009.

Write a report for a university lecturer describing the information below. 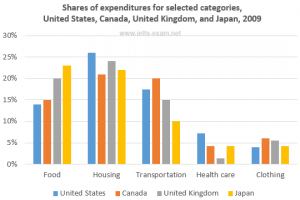 Complete the description by filling the gaps with the following words.

The bar chart 1) … how consumers in the United States, Canada, the United Kingdom, and Japan allocated different shares of total spending to categories such as food, housing, and transportation in 2009.

We can see that the United States had the 2)… housing expenditure share, 26% of total expenditures in 2009. The United Kingdom and Japan followed, with 24% and 22%, respectively. Canada had the 3)… housing share at 21%. Housing was the 4)… expenditure component in all countries except Japan.

6)…, in Japan, consumers spent 23% of their total expenditures on food in 2009. The United Kingdom had the second-highest share at 20%. Canada, with 15%, and the United States, with 14% had the lowest food expenditure shares among the countries studied.

The graph below shows the changes in maximum number of Asian elephants between 1994 and 2007. 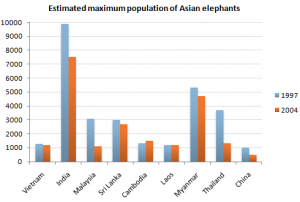 Complete the description by filling the gaps with the following words.

In most of the countries included in the graph, the population 3)…. This was most noticeable in Malaysia and Thailand, where the number of elephants was thought to be 4) … than half the figure in 1997. In the former, the number of elephants 5)… as low as 1000. India remained the country with by far the largest elephant population, but experienced a dramatic 6) … in numbers so that in 2004 there may have been as few as 7500. Despite its size, China had a very small population of at most 500 elephants by 2004.

Although the trend was 7)… overall, elephant populations were thought to have remained 8)… in Laos and Vietnam at approximately 1200. The only country where elephants showed signs of 9)… was Cambodia, where numbers may have 10) by up to 200.