A pie chart is a circular chart divided into sectors, illustrating numerical proportion. In a pie chart, the arc length of each sector (and consequently its central angle and area), is proportional to the quantity it represents. Pie charts are widely used in the business world and mass media.

The two pie charts below show the online shopping sales for retail sectors in Canada in 2005 and 2010. 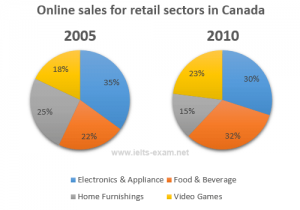 The two pie charts compare the percentages of online sales across different retail sectors in Canada in the years 2005 and 2010. For three of the sectors, it is evident that over this time frame there was significant change in their proportion of online transactions.

At 35% we can see that electronics and appliance sector accounted for the majority of online sales in 2005, but this percentage had dropped to 30% by 2010. During the same five-year period, as an increasing number of people chose to purchase food and beverage online, we can see that transactions went from just 22% to 32%, making it the retail sector with the largest overall proportion of the online market.

The diagrams below show UK students’ responses to the question of to what extent would they describe themselves as financially organised. 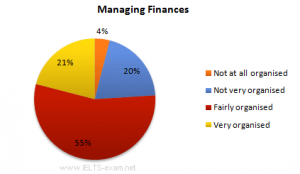 Complete the description with the following words

More than three-quarters of students (76%) believe they are either ‘very’ or ‘fairly’ organised financially, while one in five (20%) say they are not very organised in this area. Only 4% of students 3)… themselves as ‘not at all’ competent.

The ability to manage one’s finances well would seem to develop with age and experience as older students are almost twice as likely to say they are ‘very’ organised than younger ones (31% of students aged 26 or over 4)… to just 17% for those aged up to 22.

Overall, the findings suggest that students 5)… manage their finances well.